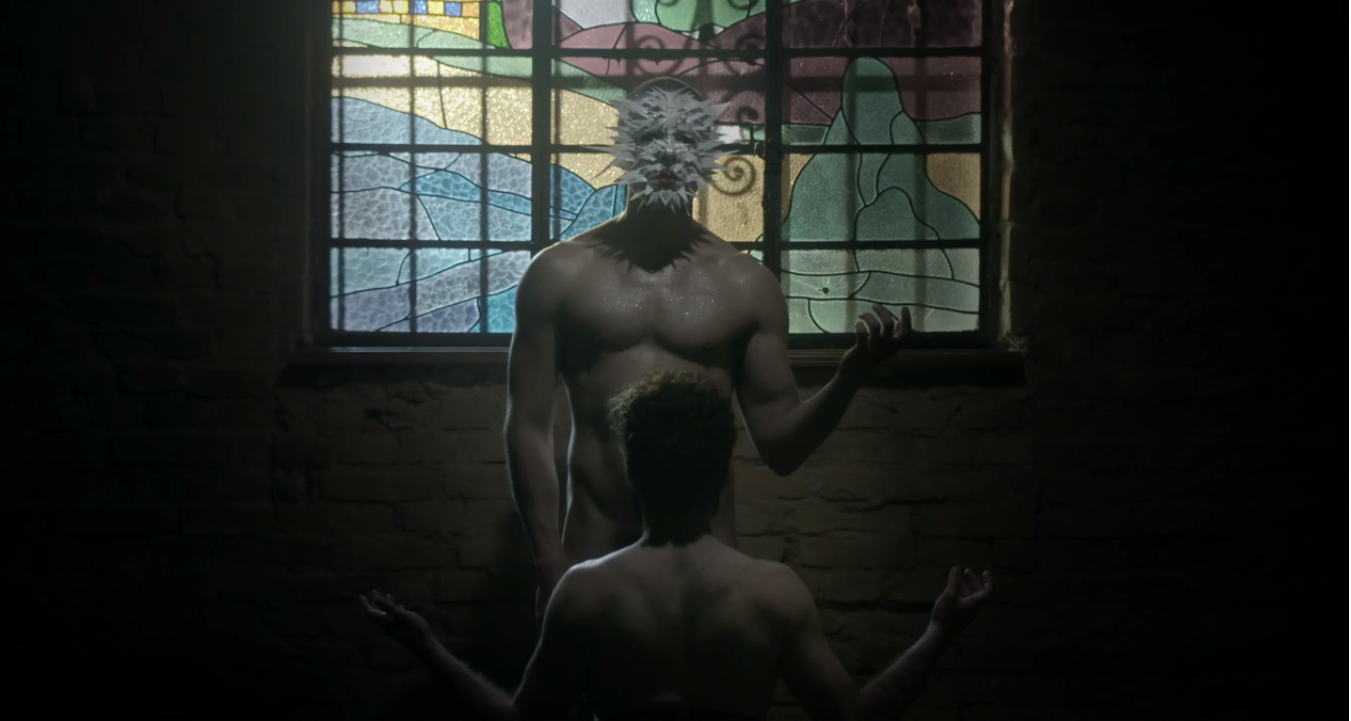 First of all: the asshole. This is how “The Blue Flower of Novalis” (“A Rosa Azul de Novalis”), by Gustavo Vinagre and Rodrigo Carneiro, begins: with a close-up of Marcelo Diorio’s ass performing slight spasms. The next shot reveals the protagonist in a yoga position, “sunbathing” his asshole to supply his alleged vitamin D deficiency while holding an edition of Hilda Hilst’s complete poetry in one hand. He recites, not by chance, the poems III and VII in the series entitled “Of Death. Minimal Odes “. Soon after, now in the kitchen preparing some coffee, the character asks if the pair of directors have noticed the aesthetic procedure that he has had on his face, specially for the film: a methacrylate application to soften the effects of facial dystrophy, which resulted from the use of AZT in the early 2000s when he discovered he had HIV. When asked whether HIV has had such a large impact on his trajectory as is shown in the life line of one of his hands, Diorio recounts the extra layer of homophobia he felt by the compulsory association between homosexuality and HIV in the 1980s; he recalls the climate of fear fueled by the sensationalist treatment of the issue by the press, citing specifically the symbolic violence of the cover of Veja magazine with the singer Cazuza. For him, HIV is still a huge burden – not the virus itself, but all the folklore that has been built around it.

Thus, by articulating in a very direct way this connection between asshole, death and HIV even before its first 10 minutes, “The Blue Flower of Novalis” poses the homophobic imagery as the central issue for confrontation and revisits a recent past whose mentality unfortunately still persists today. I refer here to the issue theorized by Leo Bersani in his classic essay “Is the rectum a grave?”, in which the author demonstrates how public discourse on homosexuals since the beginning of the crisis of HIV/AIDS has shown similarities to the representation of prostitutes in the nineteenth century. In the context of the syphilis epidemic of that century, prostitutes, sexually active women, were considered “contaminated vessels” that transmitted venereal diseases to “innocent” men. With the HIV/AIDS epidemic, this misogynistic imagery is transplanted to describe homosexuals – with the aggravating fact that, instead of vaginal sex, the criminal and fatal act in itself is the infamous anal sex, the irresistible desire of men to put themselves in the so-called “female role” in order to be penetrated. This resulted in homophobia, which accused the group most strongly affected by the epidemic – homosexuals – of being both potential killers (desirous of transmitting the virus) and suicidal (by not resisting their “impure” sexual practices, they would cause their own death). Turning the asshole into a synonym for the grave and the resulting stigmatization of homosexuals constituted an instrumentalized strategy in the Reagan era to place HIV/AIDS as a moral rather than a public health issue, which delayed, among other things, investment in research and treatment¹. Any resemblance to recent statements by the Minister of Health in Brazil is not a mere coincidence, since this current administration appears to have a propensity to revisit Reagan’s not only in this respect but also in corruption scandals. This is a first theoretical point that I would like to highlight. So, returning to the film, it seems to me that Gustavo, Rodrigo and Marcelo propose this debate in face of the heteronormative stigmatization of the taboo of anal pleasure (and all the implications resulting therefrom), and the proper cinematographic form that they find for this issue is, from the very beginning, the hypervisibility of the asshole, this forbidden locus of pleasure.

Second of all: the asshole. The unfolding of the film, as in free indirect speech, takes place in a kind of stream of consciousness, in which, in addition to the moments of the interviews and the sexual practices of the protagonist, we see the materialization of his anguish, memories and pornographic imagination, which invade the scene inadvertently. It is in this fragmented logic that we jump, for example, from the account that the character had foreseen the death of his brother, reading the short life line on the palm of his hand, to the reenactment, after a panoramic camera movement, of his first (and incestuous) lover’s funeral and the settling of scores with his mother – who thought Diorio would die before he did. His aversion to his father, an amateur race driver, translates into the engine sounds that invade one of the scenes, or into the very clash with the car-organism whose veins/cables he rips apart. One of these reminiscences transcends his own life and his family drama towards past lives: in another incarnation, he claims to have been Novalis, a German poet from the romantic era, who was heterosexual and whose work has a strange obsession, a relentless quest for a blue flower. Diorio is not interested in the “meaning” that can be attributed to the blue flower by the poet – his late beloved, God, death – to the extent that, to him, it would be closer to that “thing that does not exist but exists”, a certain mystical dimension of experience. This claim – to be Novalis – does not fail to be presented with a certain irony: far from being treated with a reverent seriousness, Diorio equates his claim with the “characters” that we take on sexually in the profile descriptions in sex apps. But in terms of the overall conception of the film, certain keys to romanticism are present: on the one hand, a detachment of the “I” triggered by the awareness of the desire for the flower, which makes possible a poetic relationship with the world; on the other hand, the relationship between religion and aesthetics in Novalis’s poem “Hymns to the Night” (quoted in the film) – exemplary, according to Vera Lins, of the way ” the first romantics […] disfigure the Christian myth and transform it.”² In its lacunar and errant structure, “The Blue Flower of Novalis” seems to establish a strange zone of contact between romanticism and pornography in all the desubjectivation and mysticism that both these categories share. In the film’s queerified version, Novalis fucked Bataille, and the blue flower never refers to the face of the unknown beloved – it is rather, as the poster of the film makes explicit, a mysterious asshole that swells of horniness “like a flower about to bloom”… And if for a moment Diorio seems to find the blue flower in the scene of oral sex, it is implied that the orchids are false, dyed in cheap aniline, and the phallus serves only to provide a “holy water bath” to his nearly catatonic body. The search continues.

Which brings us to the third point to be addressed… the asshole. Some images of “The Story of the Eye”, by Georges Bataille, are revisited in “The Blue Flower of Novalis”, the most obvious of which is when Diorio, sitting in a bowl full of almond milk, performs a ritual of care with his sexually active asshole, which, according to him, seemed rather humiliating before, but now he sees it as a sort of liturgy, a sacrifice he makes for pleasure (he wonders that the life of the French courtesans of the nineteenth century should not have been so different from his). After drying himself, he pours the almond milk down the bathroom drain, literally exclaiming, “Would Bataille be horrified at the trivialization I make of his images?” The film jokes about the Bataille images it evokes, but there is nothing banal in the creative use that it makes of them, particularly in what seems to be the less obvious one, which is the final shot. In one of the last scenes of “The Story of the Eye”, the character of Simone confesses at a church while masturbating and, when perceiving the priest’s arousal, ends up having sex with him, which has devastating consequences, as the heretic ecstasy causes the priest’s death. She then asks one of her lovers to remove the eye from the corpse and deliver it to her, which he readily does. Simone then has one of the most amazing orgasmic experiences, literally using the eye as a stimulant in all her orifices. “The Blue Flower of Novalis” ends by evoking this image, not at the representational level, but using the cinematographic apparatus itself. Diorio is on all fours, we see his asshole wide open through a tunnel plug inserted into the hole, to the point that we can see the inside of his rectum. “God is this black hole where we all want to get lost,” he exclaims, relating God to the asshole, and equating anal experience with a divine or spiritual experience, with an opening to desubjectivation. After a few attempts/shifts of the camera’s BDSM-whip zooms, the camera’s eye is finally inserted into the asshole (where not even Vertov had anticipated sticking his camera-eye). Perhaps it is time to return to the theorizing of Leo Bersani. By using the oppressor’s own vocabulary in order to re-signify it, the author denies the status of a grave to the rectum in the sense ascribed by heteronormativity, that is, a hole whose desecration inevitably leads to punishment and death, and then affirms it as a grave in another sense: “if the rectum is the grave in which the masculine ideal […] of proud subjectivity is buried, then it should be celebrated for its very potential for death.”³ Bersani regrets that the HIV/AIDS epidemic has literalized the metaphor, but he does not fail to extol the transgressing potential of “loss of sight of the self” experienced in homosexual anal pleasure, capable of burying hegemonic masculinity insofar as it “proposes and dangerously represents jouissance as a mode of ascesis.”4 It is this spiritual elevation that the film is concerned with: to stage an extreme erotic experience and its underground connection with death, not only as a translation of the religious imagination, but also as a search for a new, more potent pornographic discourse beyond any religious encapsulation (thinking in the terms proposed by Susan Sontag).5 Thus, in “The Blue Flower of Novalis”, everything culminates in the literalization of this anal image via cinematographic language, a camera invited (together with the audience) to penetrate the forbidden orifice – a camera that is not necessarily phallic, but really a camera-eye, invited to enter this threshold between light and darkness, to dwell in this forbidden zone, to listen to the murmurs that spring from the depths and finally touch the celestial dome. Cinema as a superior way of thrusting the eye into the asshole.

BATAILLE, Georges. A História do Olho (The Story of the Eye). São Paulo: Cosac Naify, 2003.